"Even though one type will dominate as we begin studying ourselves using the tool of the Enneagram, all the fixations are present in every ego. . . if we are genuinely interested in spiritual learning and liberation though the Enneagram, we need to study all the fixations--their cores and their shells--as they manifest in our lives." A.H. Almaas, Keys to the Enneagram: How to Unlock the Highest Potential of Every Personality Type 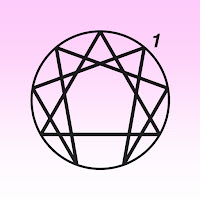 The driving force at point One is anger; typically over-controlled until it erupts as resentment when someone has failed expectations; moral tirades; yet also a "running amok" side that allows escape from one's own high standards.
When boxed in at point One, we are perfectionists, with an internal judging voice that chastises self or others for falling short of perfection (preaching).
When still at point One but more self-observing, we can be wise, tolerant, balanced, focused on standards of excellence in ways that provide an exemplary vision for others.

Typical Comments:
"I know I'm right, why should I have to compromise?" "I'm my own worst critic." "My whole career, I've been brought in to fix things." "My message as a kid was always, 'You can do better."

Engaging the Observing Self and Releasing the One Fixation:

It's important that we learn to see our patterns as they emerge, without judgment, to notice and accept as they come and go without shame or denial or trying to shut them down, to see how the fixed personality reactions show up and choose different behaviors. From this Observing Self we'll begin to see the patterns loosening and dropping away.

Within that context, some actions that my clients and I have found helpful at point One include:
Posted by Mary Bast at 5:31 PM